“It’s going to touch anyone who has had previous experiences of abuse and oppression, be it because of one’s race or religious background, or sexual identity.” – Carine Kaneza Nantulya, Human Rights Watch’s Africa advocacy director, speaking on the murder of George Floyd.

George Floyd was killed on May 25 when Minneapolis police officer Derek Chauvin held his knee to Floyd’s neck for almost nine minutes. Suffering from the pressure, Floyd, a black man, cried out “I can’t breathe,” before ultimately losing consciousness and dying not long thereafter.

Though Floyd’s killing took place in one of America’s less populous states, the reaction in recent weeks has been uniquely global. Since May 25th, protests against racism and in support of the Black Lives Matter movement have taken place in more than 60 countries, and #georgefloyd has been used 2.4 million times on Instagram alone.

While in some places the distressing video of Floyd’s suffocation prompted a wave of sympathy for, and solidarity with, black America, elsewhere underwent national bouts of self-examination. In many places around the world, citizens analyzed their respective countries, weighed on the scales of justice their respective racial structures, and, in many cases, found them wanting.

In light of such introspection, it seems that George Floyd is not just George Floyd. To the Indian minority of Malaysia, he is Sugumar Chelladury. To Aboriginals in Australia, he is David Dungay Jr.. To the black citizens of France, he is Adama Traore.

Different parts of the world, differing national customs and cultures, but the same shared experience of minority ethnic and racial groups suffering at the hands of the nation’s police.

Adama Traore… was a 24-year-old Frenchman who, in 2016, who died of asphyxiation after telling a gendarme, echoing Floyd, “I can’t breathe.” This was only discovered, however, after an inquiry yielded a second autopsy. After the first, authorities told Traore’s family that he had been drinking and smoking cannabis, and died of a heart attack. Though that was four years ago, the wounds are still raw, especially among French blacks and Maghrebis (North Africans) who live in the suburbs of Paris and claim to be commonly targeted by the police.

This population sees themselves as the forgotten people of France, the people who are unable to integrate fully into a national culture which stresses equality and secularism at the expense of recognizing ethnic difference or diversity, so much so that it is illegal for the government to keep racial, ethnic, or religious statistics. Why do so, the line of reasoning goes, if it would violate the foundation of universalism, upon which all citizens are undifferentiated and, in the eyes of the laws, no different to each other.

If for some this unique understanding of equality is a sine qua non of the French national spirit, for others it has come to represent an anachronistic barrier that blocks the path for much-needed reform. Christiane Taubira, the first black woman to serve as Justice Minister, said that non-white French are held back by “structural discrimination,” and it is well-documented that minority communities are subject to disproportionate levels of police attention and violence. But still, the political establishment of both the left and the right are loath to pursue policy solutions legislated along racial or ethnic lines. 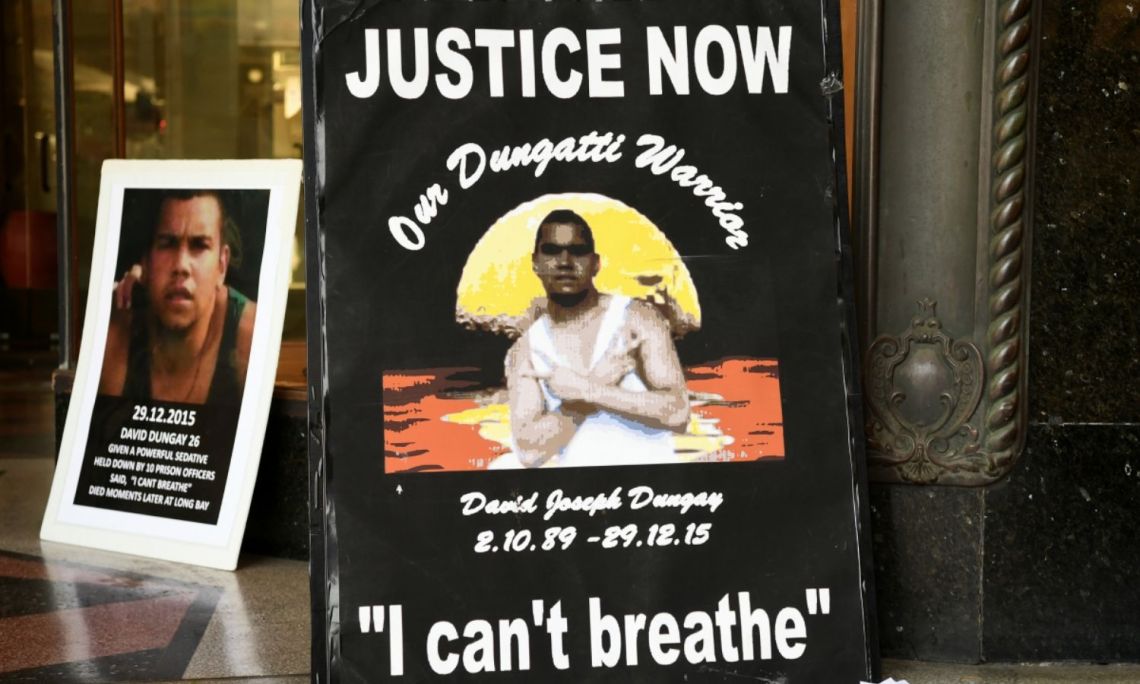 In 2015… David Dungay Jr, a Dunghutti Aboriginal man died in custody of Sydney, Australia’s Long Bay Correctional Complex. According to the New South Wales Coroner’s Dungay was diabetic and insulin-dependent. On the day he died, he had walked over to an area in which his belongings were stored and collected some rice crackers and biscuits. After returning to his cell to eat them, he was asked by nursing and correctional staff to give them back as earlier that day his blood sugar levels had been quite high. Dungay refused, causing officers to forcibly move him to a new cell where he could be monitored by camera.

During this transfer between cells, Dungay was restrained by police and given a sedative that, it was hoped, would knock out the struggling prisoner. After being sedated, however, the Correctional Service officers maintained pressure on a face-down Dungay, who, like Floyd and Traore, called out “I can’t breathe,” before finally going unresponsive, dead.

For many, the death of David Dungay Jr. was seen by many as a grim encapsulation of the oftentimes substandard treatment of Aboriginal Australians in custody that has persisted even since the 1991 Royal Commission into Aboriginal Deaths in Custody concluded there to be “glaring deficiencies in the standard of care afforded to many [prisoners],” and recommended  339 actions to be taken over a wide range of policy areas.

Unfortunately however, according to a 2018 Deloitte review, over one-third of the recommendations are yet to be enacted fully. This arises as an area of particular frustration for Aboriginal activists, as the rate at which indigenous people are incarcerated has doubled in the 27 years since the commission’s report. In recent weeks, protesters, as well as calling for the prosecution of officers involved in Dungay Jr’s killing, have petitioned for the rest of the commission’s recommendations to be implemented.

These calls, though, appear to have fallen onto deaf ears at the government’s highest level. In a recent radio interview, Prime Minister Scott Morrison beat away the idea that Australia’s structures of inequality compared with those of America, declaring there to be “no need to import things happening in other countries here to Australia,” PM Morrison said. “Australia is not the United States,” he continued, “I’m very thankful for the wonderful country we live in.” So long as the Aboriginals believe themselves to be dealt the short end of the stick, however, not everyone will agree with him.

Since… American George Floyd was killed in police custody, many in Malaysia have been taking to social media to remind their followers of their own society’s injustices. This especially the case among the Indian ethnic minority of Malaysia, who remember well the case of Sugumar Chelladury.

Sugumar Chelladury was a 39-year-old man who died in 2013 after being apprehended violently by police in Selangor, one of the Southeast Asian country’s states. The day of his death, Chelladury ran over two kilometres to try to evade capture, but once caught, was forced to the ground, and handcuffed twice. One arresting officer sat on his back, another stepped on Chelladury’s throat “until he stopped struggling.” Once unconscious, no efforts were made to resuscitate him, and the body of Chelladury was left by the side of the road for over four hours, later to be found with curry powder streaked across his face.

Though certainly grisly, Sugumar Chelladury’s death was hardly an outlier. Custodial deaths have long been an issue in Malaysia, and the Indian minority population is disproportionately represented. Ethnic Indians are less than 7% of the country’s population, but made up 23% of the deaths in police custody officially reported since 2000.

Worse still, this figure is suspected by Suara Rakyat Malaysia (SUARAM), a human rights organization, to, in actuality, be nearer to 55%. The disconnect exists as SUARAM, along with the Human Rights Commission of Malaysia, believe only 1 in 4 custodial deaths to be made public.

If there is a lesson to draw from these stories it is this: that for all those who live in a democratic society, it is always necessary to pay attention to the voices of minority populations. Sometimes it takes a crisis on the far side of the planet to prompt a bit of self-examination, but it shouldn’t. George Floyd’s death was unique in that it took the world by storm, while most killings in the United tend not to resonate far beyond American borders. If we wait until there is another case like George Floyd’s in the United States to raise a media hailstorm around police violence, for the George Floyd’s of the rest of the world, it might be too late.