This past week Germany has suffered from four minor terror attacks; three in Bavaria and one in Baden-Wuerttemberg. On July 18th, a teenage Afghan refugee attacked passengers on a train in Wuerzburg with an axe and knife, wounding five. He was later shot dead by police. On July 22nd, an Iranian-German teenager shot nine people dead in a Munich shopping centre, killing himself afterwards. On July 24th there were two incidents: a 21-year-old Syrian refugee murdered a woman with a machete and wounded five other people as he fled before being arrested. Later that day in Ansbach a 27-year-old Syrian — whose asylum application had been rejected —  blew himself up outside a bar. The Wuerzburg attack was claimed by the so-called Islamic State, and the Ansbach bomber had videos of him pledging allegiance to Abu Bakr al Baghdadi. The other two attackers have been singled out as a ‘one-off’, and both have a history of mental illness. These attacks have definitely shaken German civilians, particularly those in the south of Germany where the attacks occurred.

However, there is still strong determination to maintain the motto of “this cannot happen here”. Refugee’s have taken to the streets to protest that these attacks are “not in my name”, politicians have vigorously stated that this is not Angela Merkel’s fault and the Germans are staying steadfast in refusing to be afraid of what might happen next. As a half-German it is truly heartbreaking that, in my opinion, the only Western country that has been genuinely kind-hearted towards the vulnerable is now being faced with the frightening reality of terrorism. Angela Merkel’s stance of “this cannot happen here” has always stirred up the courage of the German’s to continue to stand in solidarity with refugees, to continue to fight xenophobia, sexism and our differences, and to work together as one whether we are German or Syrian, brown or white. Amidst the fears of another terrorist attack, I am proud of the fact that the German people – as best as they can – are being rational and are remaining calm. Terrorism, fear and hate will never conquer compassion, courage and love. 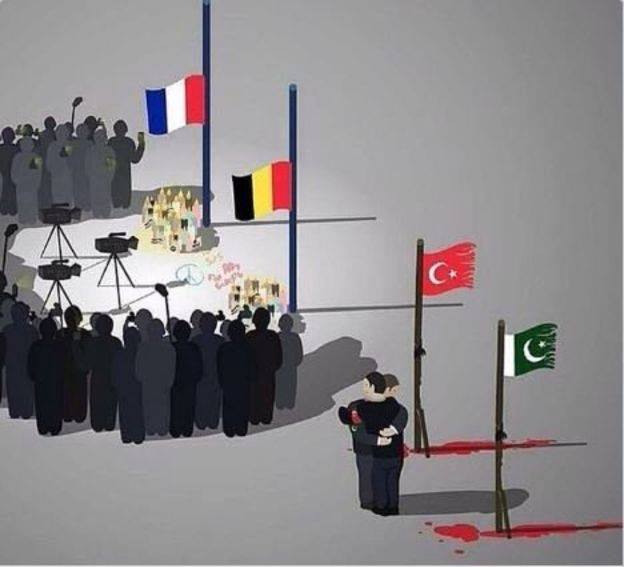 The tragic attack in Nice on Thursday 14th of June, Bastille Day, is one of utter heartbreak. Currently, 84 citizens are dead including 10 children, with 202 more civilians injured. Already the Western world is provoked and sympathetic towards the situation in France, with landmarks such as the Palace of Westminster to be lit up in the French colours to show the British people’s solidarity with the French, and the growing rise of Facebook’s “flagtivism’. This notion of solidarity is something which should be praised, as it highlights humanitarian support.

However, it must be noted that there was a considerable lack of solidarity, flagtivism and landmarks draped in national colours when just as horrendous bomb attacks occurred in places such as Turkey and Iraq. The most recent terrorist attacks in Iraq similarly happened on a national holiday, Eid, and during the holy month of Ramadan. Yet where was the media coverage? The bombings in the capital of Iraq killed over 200 people two weeks ago, but on the media it seemed to be less important than the terrorist attacks that happen here in the West. When media coverage has a greater focus and emphasis on what happens in the West it almost seems to suggest that the deaths of Westerners are far more significant than the deaths of those in Middle Eastern countries.

This is not to say that the tragic deaths of those in Nice are less important than those in the Middle East — they were equally as shocking and devastating. The media now needs to combat such acts of cowardly terror through pushing aside ancient orientalist notions of Us vs Them, and truly take up the belief of “#AllLivesMatter” by reporting with equal concern of those closer to home as well as further away. The only way we can fight such attacks is we support each other in solidarity — ethnicities aside.

The political turmoil seen in recent weeks is all being turned on it’s head as this is being written. Theresa May is reconstructing a new Conservative Government: Michael Gove has been sacked as Justice Secretary; Jeremy Hunt will be moved from his current position of Health Secretary; and Boris Johnson has been appointed as the Foreign Secretary.

Already fears have been expressed regarding Boris as Britain’s face for the Foreign Office. For this role, Boris has to look out at the wider world and yet be connected to British politics, through setups such as the M16. Moreover, the role of the foreign secretary is to build personal relationships with fellow foreign ministers through little favours. Essentially, Boris Johnson shall now become the face of the United Kingdom presented to foreign countries.

Considering the statements Boris has made concerning other countries and civilisations, it is no surprise that there have been criticisms of him becoming the Foreign Secretary. He has previously made statements such as calling Papua New Guineans “cannibals”, insulting the president of Turkey and comments on Barack Obama’s ancestry. These previous obnoxious comments made by Boris Johnson naturally raise eyebrows. Boris has before apologised for some of the statements he made, for example calling populations “piccaninnies” on the occasion of Blair’s visiting Africa, however throughout his political career he has nonetheless cultivated his appearance of being the ‘class clown’.

To now have the same class clown who was stuck on a zip-wire waving two union jack flags in 2012, the same man who only three weeks ago was rallying for Britain to leave the EU only to then jump ship once it had happened, the same man who casually uses racist, homophobic and xenophobic language is going to be representing Britain on the global stage. It is, perhaps, a little worrying that Britain is being represented by a man like Boris Johnson, and one can only hope that he will discard his buffoonery-tainted image and step up to the job to rebuild relationships with the European Union he has recently been insulting, as well as the wider world he has slandered in the past.