Earlier today (24th April), an Iranian flotilla bound for Yemen, suspected of carrying weapons for Houthi rebels, averted its course and turned back. According to U.S officials, Iranian cargo ships, accompanied by two Iranian warships, shifted course as a U.S. aircraft carrier, the USS Theodore Roosevelt moved within 200 nautical miles of the flotilla. This move averted a potential confrontation between the Iranian and American warships. Following this incident which took place in the Gulf of Aden, officials claim it is still too soon to tell if a crisis has been averted. 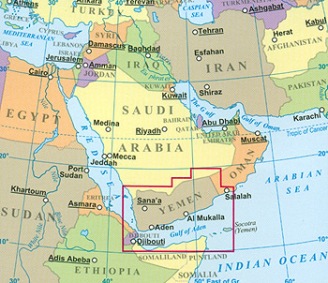 The conflict has sent tensions soaring between Sunni Saudi Arabia and Shiite Iran, raising fears that Yemen could become a new front in what some believe to be proxy war between Middle East powers. Yemen’s Foreign Minister Riyadh Yassin accused Tehran of trying to break a naval blockade on his country, describing the war as an “Iranian plot implemented by the Houthi militia”.

President Obama said that Iran has been warned to not challenge the United Nations arms embargo on the Houthis. He went on to say, “What we’ve said to them is that if there are weapons delivered to factions within Yemen that could threaten navigation, that’s a problem.”

After four weeks of ruthless airstrikes, more than a 1,000 civilians have been killed with over 4,000 injured and 150,000 displaced in Yemen. The Saudi-led coalition has destroyed many of the Houthi rebels’ sites and weapons but with Iran’s support they seem to be surviving. The Saudis are nowhere near to restoring the Yemeni president, Abdu Rabbu Mansour Hadi who was driven into exile in Saudi Arabia.

The US has been helping Saudi Arabia with intelligence and tactical advice and by deploying warships off the Yemeni coast. However with the numbers killed rising and no resolution in sight, they are now urging them to end the bombing. The Obama administration seems to have realised that the Saudis appear to have no credible strategy for achieving their political goals, or even managing their intervention.

Saudi Arabia’s much-publicised creation of a Sunni coalition to fight “the Iranian and Shiite threat” in the Middle East took two major blows when Pakistan and Turkey opted out of the coalition after having initially indicated that they would join. Riyadh worries that Iran is emerging as a legitimate player on the regional and global stage and Washington no longer perceived as a reliably anti-Iranian force thus potentially jeopardising its relationship with the Americans.

The United Nations had previously led a diplomatic initiative which made some progress, but was not given enough support and attention and the official leading the negotiations, Jamal Benomar, resigned. Finding a political solution will not be easy. For one, it will require Saudi Arabia to accept the Houthis as part of the governing power structure if there is any hope of bringing some stability to the country.

A graduate of the College of Law. I hold a LLB and LLM from the University of Leicester. I also studied political science at Manchester Metropolitan University. My interests are foreign policy, conflict resolution and women's rights. View all posts by Gaanashree Wood